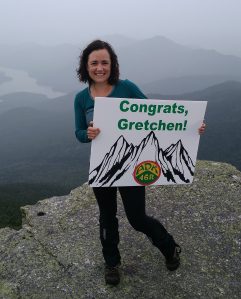 I’ll be doing a wrap-up of my journey on becoming a solo 46er in the near(ish) future but for now I’ll just write about the final hike. It feels pretty amazing to have completed, and yes I did them all solo. And no I didn’t die, even if I’m pretty sure my mom thought I might.

I saved Whiteface for my final hike. It was my grandfather’s final and it also meant some fam could drive the toll road and join me to celebrate (a.k.a. bring me champagne).

There are basically two trails to the top of Whiteface (not counting the driving toll road). The Wilmington Trail is by far the more popular, and many hikers combo with Esther. I had already checked that off a couple of years back as a single summit hike and dipping my toe for my first herd-path hike, so I decided to take the path less traveled approaching via Connery Pond. Whenever, I have the option I always prefer the less popular routes, particular for more trafficked peaks. And Whiteface can be a tourist destination for sure. Which I was reminded by those at the summit talking on their phone – on speaker. Yeah. Let’s add that one to the etiquette list.

Originally, I planned to hike the day before, but my cousin pointed out that it was Iron Man weekend in Lake Placid and was sure to be a mad house, not to mention that hotels would be sparse. Boy was he right, everything was booked up. Monday it is!

This is probably the smallest and least assuming trailhead I have every parked at with room for only a handful of cars. It’s on private property – as is the first section of the trail. Thank you to the property owners!

The trail skirts the shore of Connery Pond on an old road, before bearing away and reaching a gate at .4 miles. You’re now entering what used to be an old salvage timber road in the aftermath of the 1950 hurricane. Great spot to jog in – pretty easy for the next several miles to come – enjoy it and keep that speed up.

The trail climbs gently to a the bank of Whiteface Brook at 3.1 miles and reaches a lean-to above the bank of the brook at 3.6. You’ll hit some re-routes to avoid crossing the brook, a few muddy sections, and some more worn areas. But for the ADKs it is a walk in the park and the most maintained trail I’ve seen in ages. 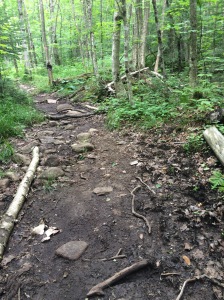 My trail book said to turn left at the lean-to but it is clearly (and easily followed) marked straight. From here you start “climbing”. But by the end of the day you’ll yearn for this section. On a humid day you’ll get your first sweat in. At 4.5 miles the trail climbs above the bank and pulls away from the brook. I found it a great spot for a snack and to fuel up for the last 1.6 miles. The fun is just about to begin.

From here the grades continue to increase and footing gets rougher with various boulder climbs. Be careful to pay attention to the trail. In one section, in the evergreen, I lost the trail.

There is a large boulder that you need to climb up. If you follow the beaten path (like I did) to the right it’ll eventually peter out. Don’t try to bushwack it – turn around and you’ll pick it back up. The key is when you see the boulder just climb up it – even if the beaten path goes around.

You must go over this boulder! 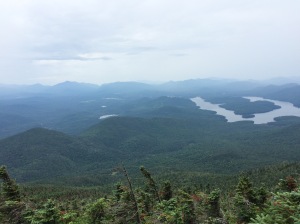 It  gets steeper, and steeper, and steeper yet, with rougher and rougher footing. There is a short breather when you reach a nice view on rock chute at 5.6 miles. I remember thinking where the hell is this damn viewing ledge. Knowing the last .5 miles would be even steeper and challenging.

Here’s where I met rain. Did I mention the forecast wasn’t looking great? Oh joy. Nothing like a steep rock chute freshly wet from the rain. But on the plus side, I was in the woods for the rain, and barely got wet, it actually cooled me down a bit.

Reaching the timberline at 5.8, the trail in now marked with yellow paint blazes and climbs over various boulders and ledges. Pay close attention and take your time following the paint blazes. I lost them about half-way in and made my own way up, where others had as well. It was doable but a couple of leaps from slippery ledge to ledge, that would be better to have avoided. I found it easy to follow on the way back down. Just keep a close eye on the yellow blazes not the beaten path from previous hikers.

I took nearly no pictures during challenging section – something about focusing on the actual hike part and hauling my winded ass up the mountain.  It is tough but by no means in the top 10 for difficulty in the ADK46.  But here are a couple from another website. But yeah my pictures don’t capture much from 4.5 miles in until the summit. 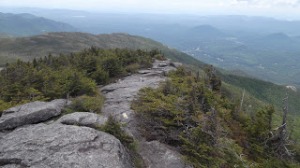 On the plus side you’ll fly down on the way back once you’re past the steep section and you can just run out. I literally didn’t see a single person until I reached the summit. Just the way I like it. And couldn’t be more perfect for my final hike – just me and the trail.

At the summit there weren’t any hikers. Just some tourist doing yoga poses, below the summit, looking very confused seeing me hike up. One girl asked if I hiked all the way up. I was hungry and tired and resisted being snarky but rather stopped and chatted for a bit about the ADKs, 46 and that this was my final hike. They were very congratulatory and nice. 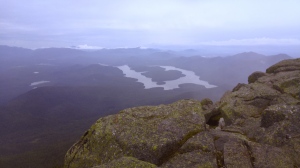 Upon getting to the top of the summit there wasn’t much of a view left. We were basically in the clouds, but I had some decent views on the open climb up. But only snapped one picture.. On the observation deck my mom, sister and niece greeted me with an epic sign, lunch and best of all champagne. Thanks, you’re the best:)

The weather turned nasty so we headed inside to relax, eat, drink and celebrate. Also having ice to refill in my water reservoir was such a treat. Not to mention fresh lunch, dessert and did I mention the champagne? (only a glass for me, since  you aren’t done until you hike back down). P.S. you DO have to hike down. Getting a ride back via the toll road doesn’t count in my book or by the official designation of the 46ers and they’ll make you redo it. #JustSayin 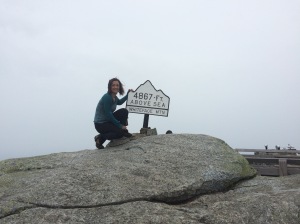 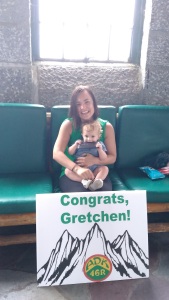 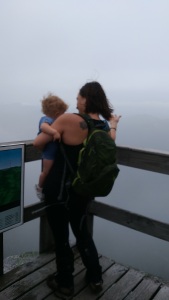 On the way back down the weather lightened up (no rain), and the clouds even lifted. Of course right after I left the summit. Damn you ADK Gods, but it was a quick hike down. I spent some time soaking it in at Whiteface Landing, thinking of my completion, my grandfather and the like. I’ll hold my family story and the significance  for my final journey post, but it was a great moment of solitude.

I then  jogged the rest of the way out and even with the hour break at the top and about 30 min or so at Whiteface Landing completed in 9 hours. I couldn’t quite believe the hike was already over with hours and hours of daylight to spare. Woohoo!

Even better I had a comfy hotel room waiting for me (thanks, mom), with an adjoining room for my mom and sister. We had a great celebratory dinner and opened some gifts from family. Thanks to my Uncle Rich (46er #1087 / 1974) for the rockin’ ADK46 sweat shirt! He was the first in our family to become a 46er — even if I did do them slightly faster:)

My sister and I then “hit the town” for some drinks. And by hit the town I mean we went down to the hotel bar and had two drinks around the outside fire pit. I know, big partiers.

I have no doubt I’ll continue to hike these mountains for many, many years to come, though there are some that I’ll leave as a one-time experiences (ahem Couchsachraga). Until next time… Stay tuned for my wrap-up post of my journey on becoming a solo 46er in the near(ish) future. 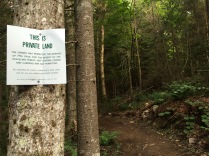 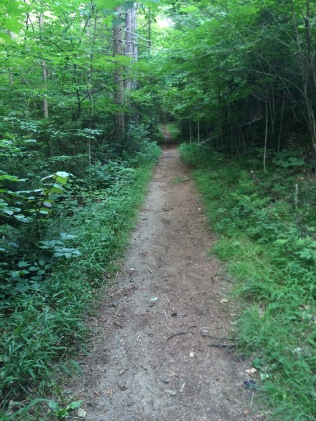 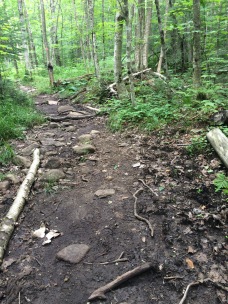 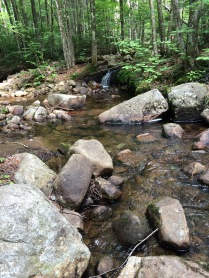 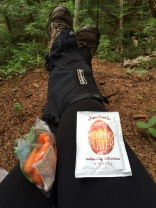 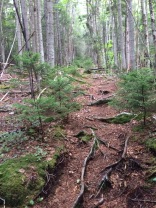 You must go over this boulder! 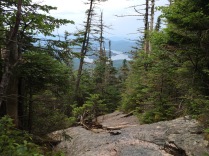 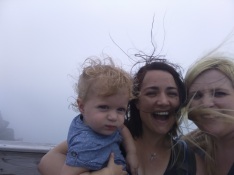 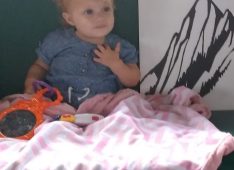 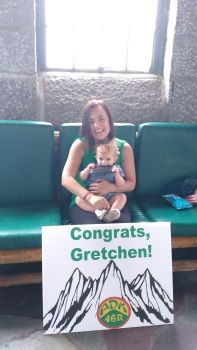 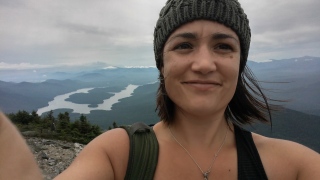 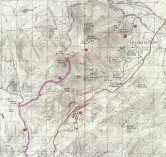